Expanding the popular board game The Manhattan Project with more nations, H-Bombs, Rockets, and other goodies.

A power struggle at the beginning of an atomic age. A revolutionary new technology. Who will use it to build the deadliest arsenal and become the world's dominant superpower?

The Manhattan Project is a low-luck, mostly open information efficiency game in which players compete to build and operate the most effective atomic bomb program. Players do not "nuke" each other, but conventional air strikes are allowed against facilities.

The game features worker placement with a twist; There are no rounds and no end-of-round administration. Players retrieve their workers when they choose to or are forced to (by running out).  An espionage action allows a player to activate and block an opponent's building, representing technology theft and sabotage.

The Manhattan Project is already ranked under 320 at BGG.

This kickstarter campaign is all about funding this new Mega Expansion for the base game. It will contain several mini-expansions in one box...

Pakistan - 1 Worker
Discard one of your Bomb Designs to the bottom of the Bomb Design deck. Then collect $10 or 5 Aircraft or 6 Yellowcake from the General Supply.

Australia - 3 Workers
Collect 1 Yellowcake for each Mine, damaged or undamaged, occupied or unoccupied, owned by your opponents.

India - 2 Workers
Pay a player to use his University. You must pay $1 per worker shown in the output. Do not place workers on the University; simply collect the output as if you had. You may use an occupied University, but not a damaged one.

South Africa - 1 Engineer
Dismantle a bomb by placing a Damage Counter on it and paying its loading cost. Each dismantled bomb is worth 5 additional points. Dismantled bombs cannot be loaded or tested, and cannot be dismantled twice.

North Korea - 1 Scientist + 1 Yellowcake
After you activate this card, the other players may choose to give you $3. If they do not, you may collect 1 Uranium or 1 Plutonium.

Israel - 1 Worker
Build a bomb ignoring its Scientist requirement or its Engineer Requirement. This ability cannot be used when building an H-Bomb.

Brazil - 1 Worker
Exchange any of the following for another between your Personal Supply and the General Supply: 1 Fighter, 1 Bomber, $3, and 2 Yellowcake. 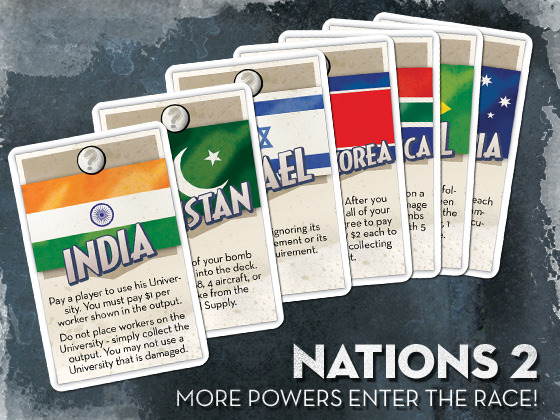 When you place a Scientist and an Engineer in the Design Bomb space on the Main Board, instead of the regular Design Bomb Action you may choose to build a Rocket Factory.

Rockets have 2 uses. During an air strike, you may use a Rocket instead of a Bomber to damage an opponent's building. They work exactly the same as Bombers except they may even be used against an opponent who still has Fighters in his supply.

The other use for Rockets is for loading bombs. Here, they may also be used instead of Bombers. When loading a Bomb using a Rocket, the money portion of the cost is double the normal value shown on the bomb, but the points obtained from loading are also doubled. To show this, take 2 Loaded Bomb counters from the supply instead of 1 and place it on the same face-up Bomb card in your supply. 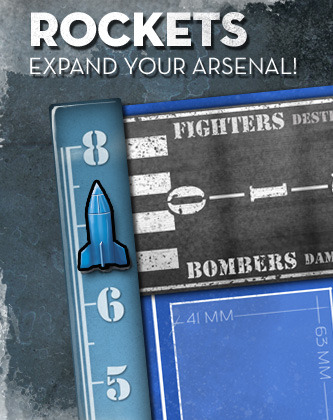 During the game, when you take a Design Bomb action, instead of choosing a regular Bomb you may instead secretly place 2 of the available bombs on the BOTTOM of the Bomb deck, and then take one of the available H-Bomb Cards. Note that since you have removed 2 cards, you will only receive the H-Bomb card and not the 2 Bomb cards that you would normally receive. Each player is allowed to take multiple H-Bomb cards through successive Design Bomb actions. When the H-Bomb cards have run out, then the alternative H-Bomb Design action will not be available.

H-Bomb cards work exactly like regular PLUTONIUM bombs. You keep them in your hand (or face down in your supply) until you are able to and wish to build them. The only differences are the additional requirement of Lithium Deuteride in addition to Plutonium AND that the high point value is actually "WIN," meaning the game is over and you have won! LD is produced by LD plants, which work exactly like Mines - except they produce LD instead of yellowcake. 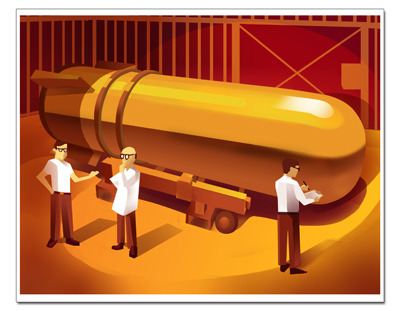 The following stretch goals have been met from our Kickstarter, so we'll be including them here as well!

Player reference cards. Not to be nearly as busy as these but they are examples of what we're talking about. 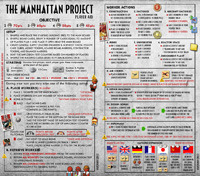 A simple overlay board to allow you to dial up or down the amount of air strikes. One side would have only 1 worker slot, the other side would have 3. Below is an example of the area that would be covered. 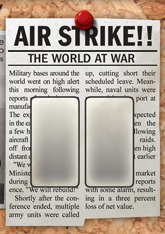 General Supply Board with space for Bomb Cards, Yellowcake, and Money. There is a lot, but we hope to include stuff from the expansion as well.

We were saving this for another expansion, but if we can kick this campaign in high gear, we'll add it to the Mega Expansion! Famous people from history come to life in the game. These are cool roles you choose each time you pull back and have persistent powers. These roles will most likely (not yet set in stone) be: