The Deluxe Version is a two part box and contains custom wood bits in the shape of a nuke symbol and mushroom cloud! 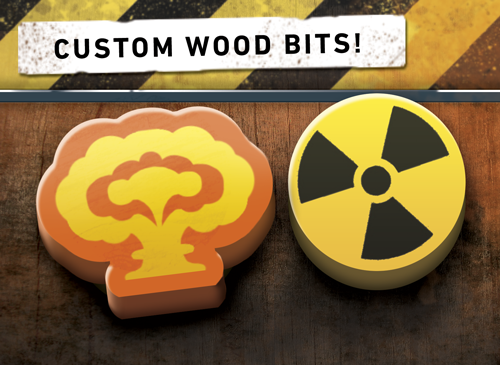 The world is again threatened with war! As the War Minister of your small nation, you have been tasked with confronting aggression by developing atomic bombs for your country. Your spies have stolen the needed technology, but you need to acquire the materials and personnel to get the job done before your rival nations do. Once someone has built 10 kilotons of bombs, the final round will finish, and the player with the most bomb points will win, their nation’s survival assured!

To do this, you will be playing cards representing the training and use of teams of laborers, scientists, and engineers to complete various plans, until you have assembled enough bombs to win! Here is a example of a lucky hand being played:

MP: Chain Reaction is a stand alone game based on the popular "Manhattan Project" board game by Minion Games, this is a simpler card-only game using dual-purpose cards in a quick and exciting race to completion.

Theme & Narrative: Fear and paranoia is a powerful motivator

Instead of stretch goals we've chosen to offer a deluxe version of the complete game from day one. This version will be exclusive to you, our Kickstarter backers.

The deluxe version of the game comes in a nice durable 2 part telescoping box. It will contain 108 high-quality poker sized cards:

Game play is simple, but never the same way twice. The goal is to claim the Bomb cards for points. This takes resources to accomplish.

Resources are earned by “chaining” cards together. You place a card sideways to use it as workers and vertical to make use of the building. You then play another card that uses the outputs of the previous card as its input. Which, in turn, provides its own output. And so it goes until the eventual output is what the player wants. Most of the time this is going to be Yellow Cake when the game begins, followed by “Uranium”, and eventually being able to provide enough resources to build a bomb.

The Manhattan Project: Chain Reaction can be played by 1 person. The game is set up and played liked normal. Where applicable, a small number of cards list how they are used if being played in a solitaire game. The goal for the player is to earn as many points as possible before the Industry draw deck is depleted. After that, the player’s goal is to beat their previous high score.

HOW TO PLAY VIDEO by Eric Jome:

"Challenging, engaging, and fun, I really enjoyed my time with The Manhattan Project: Chain Reaction. It was enjoyed by all our players for different reasons that ranged from creative play to engrossing problem solving. Most importantly, everyone had fun. If you enjoy card games where you must build and connect your logic to achieve victory, do sit down and play The Manhattan Project: Chain Reaction."

Much more details on how to play and feedback from all ages of players can be found here in his complete write up:

We won the Father Geek Approved seal which means this game is great for kids, casual gamers, and heavy gamers.